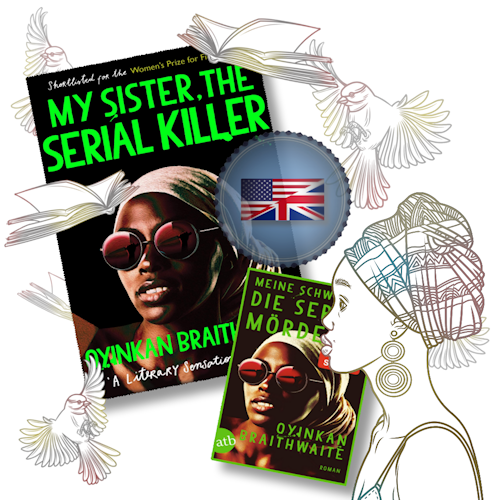 I’ve read this book in English, so I wanted to provide an additional English review as a complement to my German review.

Ayoola and Korede are sisters like day and night:

Ayoola is beautiful and charming, her parents’ golden child and every man’s dream. Korede, on the other hand, is plain and harsh-tempered, works as a nurse – and has to clean up after her sister when she kills yet another of her lovers. As if that wasn’t bad enough, the young doctor Tade, whom Korede secretly pines for, also falls in love with man-eating Ayoola …

I highly recommend the audiobook to anyone who is fluent in English.

It is spoken by British-Nigerian actress Weruche Opia, and she gives a very nuanced performance, finding different dialects and timbres for different characters, which is fitting. After all, the languages Edo, Efik, Adamaua-Fulfulde, Hausa, Idoma, Igbo, Central Kanuri, Yoruba and many more are spoken in Nigeria, in addition to English.

»We find ourselves using a sliding racial scale …«¹

Oyinkan Braithwaite succeeds in breathing life into the absurd basic idea, with a concise, distinctive writing style and a lot of wicked humor. Despite the outrageous plot, she portrays the characters in an authentic and believable way – with the noteable exception of Ayoola, a walking cliché that merely serves as a sounding board for narrator Korede. In my eyes, this is certainly intentional, as it emphasizes all the more that Ayoola is reduced to her beauty by everyone – including the reader!

In general, the novel has much more depth than one would expect from the summary; in fact, I would describe it as a satirical parable on the topic of ‘colorism’.

What is ‘colorism’ (also known as ‘shadeism’)?

Racism is something everyone is familiar with at least in concept, but the term ‘colorism’ leaves people with puzzled looks on their faces all too often. Well, ‘race’ is a social construct anyway, but racism usually refers to the discrimination of people of one supposed ‘race’ by people belonging to another.

‘Colorism’, on the other hand, can happen entirely outside of this social construct – or even within the same ‘race’. Black people with particularly dark skin find themselves belittled even by other black people of a lighter hue, and they often do not get the same opportunities. This is a social problem that is prevalent not only in Nigeria, where the novel is set – which is why skin-bleaching products sell extremely well.

»We are better if we are lighter.«¹

Oyinkan Braithwaite shows colorism within the black community – in my understanding one of the novel’s central themes. Ayoola, who is adored as beautiful, has lighter skin than her sister, who is generally considered unattractive. Korede has internalized this to such an extent that she in turn describes the skin color of attractive people as ‘light’.

No, Korede is certainly no saint; she is a victim turned perpetrator. She feels powerless and ugly, so she puts people she considers ‘less than’ in their place with vitriol, treats the ‘uneducated’ cleaning staff in an exceedingly degrading manner. In my opinion, this is a very powerful way for the author to show how racist/colorist wounds are passed on.

Colorism is not the only issue that is broken up a bit by humor and yet made crystal clear.

As the plot progresses, the flaws of an environment and a society that produced a woman like Ayoola become increasingly evident.

She has experienced violence in the family at an early age, she has witnessed her violent father being lauded as a good, upstanding man everywhere; hence, an underlying resentment against men in general might be one underlying cause of her killing spree. Like her sister Korede, she passes on her own injuries – albeit in an immensely more drastic way.

As a child, Ayoola already learned that her beauty gave her an advantage over her plain sister. Therefore, beauty was clearly her ticket to a better life with more freedoms. Combined with a learned propensity for violence, the result is a decidedly toxic, dangerous combination.

The book is thrilling, entertaining, and thought-provoking, and for many of the chapters, I liked it very much. Towards the end, though, I would have liked to see the two sisters experience more inner growth, finally speak their truths and bring their hidden demons into the light … But both stay exactly who they were on the very first page.

I would like to leave open whether or not Korede ends up blowing her sister’s cover on the final pages, when she realizes that she must choose between Tade and Ayoola. As far as character development goes, it does not matter either way. Neiter choice would be driven by a personal sense of injustice or personal growth, but by a feeling of obligation (towards Ayoola) or a feeling of infatuation (towards Tade).

In the end, I felt that the book didn’t live up to its potential, that it wasn’t brought to a conclusion that elevated all of the issues. The author creates a rich literary breeding ground for the topics addressed, but the characters remain almost untouched by all of it – things are the way they are, period, no one seems to be inclined to attempt meaningful change.

¹ Quoted from: Tom Burrell, “Uglified: Why are Black and Beautiful Still Contradictions?” in Brainwashed: Challenging the Myth of Black Inferiority, 2010

(German) reviews for this novel on other blogs 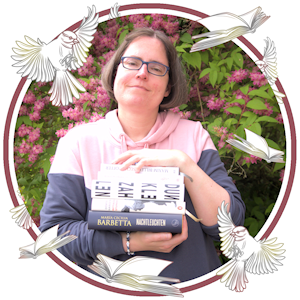 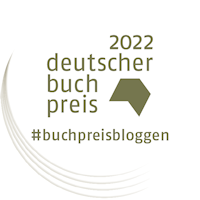